A now-deleted tweet from The Callisto Protocol director Glen Schofield, the co-creator of Dead Space and former co-director on several Call of Duty games, has fired up discussions about crunch in videogame development over America’s Labor Day weekend. The topic of crunch culture has been a major point of conversation for many years, especially in the videogame industry. The concept of ‘crunch’ – working long overtime hours to push for more development progress – has been widely criticised by many prominent members of the industry for causing negative symptoms including burnout and depression among developers forced (explicitly or implicitly) into pushing past healthy work boundaries.

The tweet, from Striking Distance Studios CEO Glen Schofield, read as follows (edited for clarity): “I only talk about the game [The Callisto Protocol] During an event. We are working 6-7 days a week, nobody’s forcing us. Exhaustion, tired, Covid, but we’re working. Bugs, glitches, and performance fixes. Last pass through audio. 12-15 hour days. This is gaming. Hard work. Lunch and dinner. You do it ‘cause ya love it.”

Schofield later deleted the tweet. However, it was archived by several people, including Jason Schreier (Bloomberg reporter). posted a screenshot The tweet. Schreier hits out at the sentiment, calling it “weaponised passion” and saying, “This, from a studio head, is crunch culture defined. Of course nobody is ‘forced’ to work insane hours. But imagine the reduced bonuses and lack of promotion opportunities if you don’t?” Schreier goes on to say that “This is why people burn out of gaming [development].”

Schofield, then posted a tweet He sincerely apologizes for his previous statement. In his follow-up, he says, “I tweeted how proud I was of the effort and hours the team was putting in. It was incorrect. We value creativity and passion, not long hours. I’m sorry to the team for coming across like this.” His statement re-ignited discussions around the topic, however – not least because they happened during America’s Labor Day weekend, a holiday to honour and recognise the American labour movement. 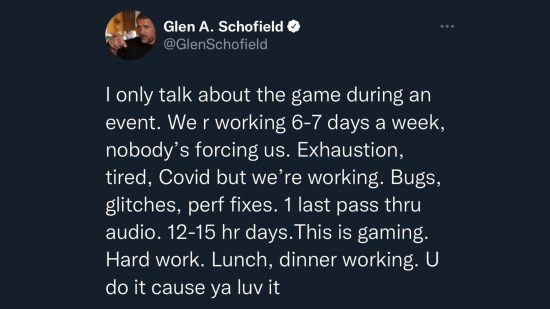 Jessica Gonzalez, founder and CEO of A Better ABK employee organizations and the Game Workers Alliance says in a tweet, “I feel so bad for Glen’s developers. This is what your studio head would post. Toxic.” Her and Jason’s tweets were just the start, as many other development figures chimed in to offer their support and thoughts on the topic. Don’t Nod creative director Florent Guillaume says Schofield’s tweet reminds him of his days with Ubisoft – “Of course we are passionate about our work, but that’s how people have been constrained to crunch for decades, and still are.”

A lot of developers echo Guillaume’s sentiment, condemning the idea of excusing overwork with ‘passion.’ Naughty Dog senior tech gameplay animator Maebe Jay Sewell reflects Schreier’s terminology, saying that she calls this effect “passion crunch” and that “It causes bad productivity expectations, worker exploitation, burnout, and teaches new devs the same causing a circular pattern of passion crunch.” Coraly Rosario, senior UX designer at Niantic, says, “Crunch is not ‘the standard’ nor acceptable. Proving your passion doesn’t mean you sacrifice everything else for it. Personally, I view it as a leadership and production failure, regardless of whether your employees opt into it.”

Many commenters believe that overtime is due to mismanagement. Bungie senior design lead Tom Farnsworth remarks that “Crunch is unnecessary, and represents a failure of planning by leadership.” Minecraft tech lead Mikael Hedberg comments, “Individual devs crunch because they’re too passionate to let awful planning ruin projects. This allows poorly planned projects to succeed, and those responsible for creating them get bonuses. The cycle continues.” Mike Bithell of Bithell Games adds, “Crunch is bad and is always a failure of management to accurately scope/budget projects.”

The NPD Group’s Mat Piscatella further emphasises that “Crunch isn’t something to be proud of. It’s a failure in the pipeline if it isn’t planned. It is cruelty if it is planned. In any case, it ain’t good.” Dragon Age: Dreadwolf creative director John Epler of Bioware explains how the actions of a studio head can affect their team: “One of the hardest lessons to learn is that when I crunch, other people crunch. Either because I’m creating additional work (assets don’t stop with me), or because people see it and think ‘oh I guess that’s the expectation.’”

Many devs took the opportunity to call upon their peers, especially those who are in positions of power to help them do better. Kayla Arenas, former Riot audio producer, is now a Blizzard audio producer. tells producers to “Build in buffers to avoid crunch and stay ahead of/on schedule. They need four weeks according to localisation. Give them six when you chart your timeline.” TT Games lead designer Tim Spencer addresses Schofield directly, saying, “You should be forcing your staff to work eight hour days, five days a week, take their holidays whenever they like, and change scope/launch date to suit.” Obsidian game director Carrie Patel gives advice to those in leadership positions: “Don’t normalise crunch. Don’t build an unrealistic schedule on your team’s ‘passion.’ Don’t weaponise their care. Healthy, high-functioning teams make great games, and they stick around to make them for the long-term.” 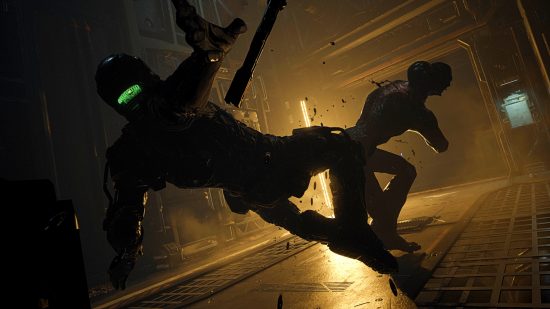 Carrie’s sentiment about happy, healthy devs producing better output is echoed by many other members of the game industry. Rami Ismail (formerly from Vlambeer). maintains that “No game in the history and future of game dev was or will ever be worth the health of even a single developer.” Blizzard principal game designer Mike Stout says, “I’ve crunched a lot in the last 20 years of making games. It’s never been worth it. This has not happened once. It damages people, it damages the game, and it’s never as effective as proper planning, scoping, and project management. It’s bad leadership.”

Andrew Spinks, Terraria’s lead developer, says that “Re-Logic employees only work four days a week, get plenty of holidays, and frequent bonuses. You should have a life outside of your job, no matter how passionate you are.” Ash Lyons, lead VFX artist at Gearbox, comments that “problems don’t get solved when you’re overworked. In fact, many of my ‘AH HA’ moments have arrived while not at work, but while staring at a wall or cleaning my kitchen.”

The message, it seems, is as clear across the board as it was last time similar discussions were raised – crunch is detrimental to the health of a company’s workers and, ultimately, detrimental to the health of a project. It’s something that requires careful management to avoid, and those in positions of power need to be aware how their own personal desires to put in extra hours can reflect on the teams that they hold power over.

Hopefully, each time these conversations arise, they help spread the word a little further – both among those in game development and among people who play and enjoy videogames, so that they can better understand the human cost that goes into making the things we all love so much.

Our recent trip to Gamescom saw us talk to Trivium’s Matt Heafy on metal in games, explore the FromSoftware homages in Lies of P, and contemplate how the upcoming Hyenas needs more Escape From Tarkov. We’ve also got recent Victoria 3 impressions for the upcoming strategy game, and a Tempest Rising interview talking about the game’s similarities to EA’s Command & Conquer and how its devs hope it will inspire a new entry in its own series.

The Callisto Protocol dev Apologizes For bragging About Crunch Despite “Exhaustion”

What the Emergence of Metaverse, Web3 Means for Today’s Brands and Marketing Ecosystem

What the Emergence of Metaverse, Web3 Means for Today's Brands and Marketing Ecosystem