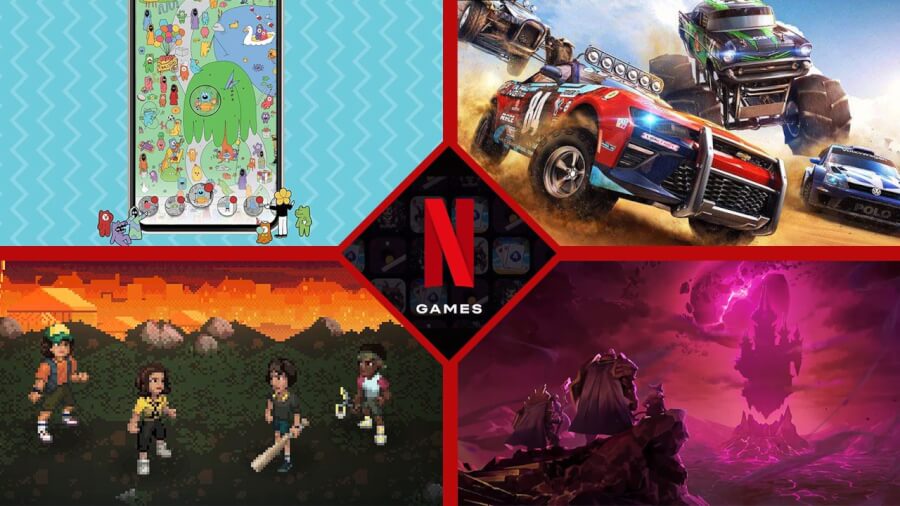 Netflix now has over 20 mobile games available on its platform and below, you’ll find a full list of every single game Netflix has released so far on iOS and Android as of August 2022.

Gaming has already played a minor part in Netflix’s history, with a small collection of games and VR experiences released over the years. In November 2021, Netflix launched Netflix Games within its app. This was a result of Netflix’s increased interest in gaming.

For the most part, Netflix’s games have been acquired from other gaming studios but has also made some acquisitions in the space:

Netflix gaming is akin to Apple Arcade. In this case, you pay a membership fee and get unlimited access. All games are free to download, and there are no ads or microtransactions.

According to Apptopia, mobile games on Netflix had 8.1 million downloads worldwide as of January 2022. This includes both iOS and Android. Updated stats in August 2022 suggest that the number is now 23.3 million downloads, representing just under 1% of Netflix’s overall subscribers trying out the initiative.

Here’s a rundown of every game Netflix has released so far. 26 mobile games are available on Android and iOS as of August 2022.

Breach into the Breach This is a mobile port to the beloved pixel-art strategy video game that’s also available on PC.

Here’s what you can expect:

Civilization is in peril, and it’s up to you to defend it. Lead a team to save the world from alien threats in this turn-based strategy game.” This unique game notably uses your phone’s camera to help you immerse in the game world and gives you control using your blink.

Here’s the official description for the adventure game:

“Dive into a world of memories and experience a soul’s journey into the afterlife as your whole life flashes before your eyes.

It all starts after you die. You’re aboard the ship of a mysterious man tasked with shepherding souls to the afterlife. He must know the details of your life in order to help you pass on. Then he sends you back to relive your most important moments.” The tabletop game Mahjong made its way onto Netflix in July 2022 and is pretty much exactly what you’d expect. You can match tiles of varying difficulty.

Its unique background and tile designs are a highlight of the room. Stranger Things You can do a little crossover with Netflix IP. A simple, yet addictive mini-game from the creators of Down Well is now available.

You control a small green creature with a stick and a hammer. It is charged with jumping up and beating baddies!

It has colorful assets and is one the most highly-reviewed Netflix Games with a 4.2 rating on Google Play.

Based on IP: It is not (but it will be adapt into a Netflix series).
Developed by:
Size: 259MB
Developer: Exploding Kittens, Inc
Netflix Released: May 31, 2022

A premium card game has been released on Netflix. The original game is still available on the app stores.

It is notable for being one of the first major multiplayer-focused games.

The game is also set to be expanded upon the arrival of the Netflix series in 2023 with “an exclusive expansion pack”.

Here’s a rundown of what you can expect from this cookie-clicker-type game.

“Hatch and collect rare dragons — then help them revive their magic in this colorful and beautifully animated idle adventure game.

Save the kingdom by discovering each dragon’s unique design and personality. Some dragons — like the Pug Dragon, the Queen Dragon and the Robo Dragon — offer better rewards and moneymaking abilities.”

This top-down roleplaying video game lets you play Will, a heroic shopkeeper who secretly dreams to be a hero.

Townsmen, a strategy game, has been around in some form or another for decades. The Netflix port of Townsmen is a PC game with redesigned controls and other features.

Here’s the official description for the game:

“Build a medieval city, make smart financial decisions and do whatever it takes to keep your people happy. Who knew running a kingdom was so tough?” This new top-down game has many elements. It’s a shooter, it’s a looter and has RPG elements. It was originally a Kickstarter project that was funded. The game is currently in early access on Steam. It’s a sequel to Relic Hunters Zero – Remix Published in 2015.

Rogue Snail is a developer based in Brazil and described as a “fully remote” gaming studio with over 40 employees.

Based on IP: No
Developed by: PikPok
Size: TBD
Netflix Released: April TBD 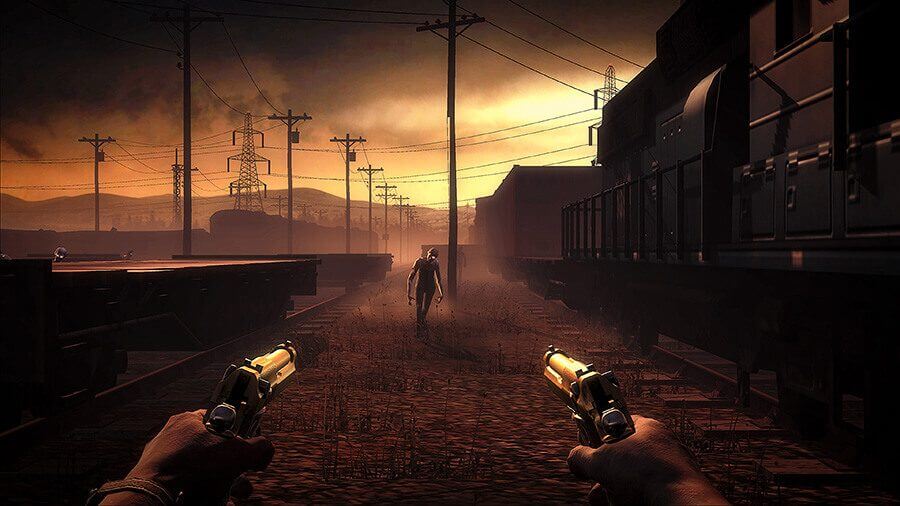 Into the Dead 2: Unleashed – Picture: Netflix

This first-person zombie shooter on rails will be available on Netflix in April 2022 (first anticipated to arrive in March 2002).

As we learned from PikPok games, the plan is to keep the old free version of the game open even when Netflix loads up.

Based on IP: No
Developed by: PikPok
Size: 333MB
Netflix Released: March 22nd

This brick breaking game was originally released on consoles almost a decade ago and has been remastered exclusively for Netflix.

There are four modes, global leaderboards, and many other features.

We had the opportunity to speak with PikPok Games (New Zealand) about Shatter Remastered and the mobile remastering process.

This is a True Story

Based on IP: No
Developed by: FrostyPop
Size: 849MB
Netflix Released: March 22nd

Another entry from the Frosty Pop team came in March with possibly one of Netflix’s most unique games to date and one of the best-reviewed.

Here’s how the educational game is listed in the app stores:

“Explore a beautiful, hand-painted landscape in this lush narrative puzzle game that’s based on actual events and interviews.

Survive windstorms, catch poachers and even make friends with a goat Adventure and insight await you at every turn as you search for water and marvel at Earth’s natural beauty.”

In the debut game for Canadian mobile game studio Hyper Hippo, you’ll be traversing dungeons in this crawler that’s labeled as a role-playing game.

Here’s how the Netflix game is listed on the app stores:

Tap your way through deep dungeons, fight as a team and show your enemies what Dwarves are really made of!”

Here’s what you can expect from the side-scrolling rhythm game.

“In this fast-paced rhythm runner, every action has an explosive reaction and no amount of mayhem is too much. You will play the role of Ziggs and slay the Piltover streets.

To avoid obstacles, disarm enemies, and create maximum chaos, bomb, bounce, and bop to the beat to the music. Cause musical mayhem while outrunning no-fun-allowed Heimerdinger in your quest to build the greatest bomb the world has ever seen.”

This strategy card game was first released on PC in December 2020. Now, it is available exclusively on Netflix via mobile.

The game is similar to Hearthstone in that you build decks while traveling across the rich world to save Arzu.

Based on IP: No
Developed by: FrostyPop
Size: 325MB
Netflix Released: January 18th 2022

Based on a webcomic Krispee Street developed by FrostyPop, is a Where’s Waldo-esque game that pits you with finding creatures and individuals within a large space.

It’s relaxing and does exactly what it says on the tin with colorful characters and landscapes.

Competing with the likes of Candy Crush and Bejeweled is Knittens, Netflix’s own match-3 puzzle game.

Based on IP: No
Developed by: Gazeus Games
Size: 86MB
Netflix Released: December 2, 2021

Netflix users have the opportunity to play the classic game dominoes with this easy board game.

This game received some of the lowest reviews of all Netflix games. They were critical of unfair AI advantages and a lack of features such as an undo button and online play.

Damp Knat is a mobile game development company that is run by Reece Millidge from the UK.

“Wonderputt Forever brings a pocketable nostalgia trip to places you’ve never been before. Mini-golf where you must plan your shots and sink the ball into each hole. Each level brings the course to life. The courses change and shift as you progress, making it easier to plan your next round. Play in Par Mode, then keep the fun going through hundreds of geometric-themed holes as you unlock rewards in the Geometry Trips mode.”

The first Wonderputt game was first released back in 2012 which itself was a port of a Flash game with a subsequent release in 2017 called “Wonderputt – GameClub”.

Asphalt Xtreme, originally released in 2016, was removed from the two app stores and is now exclusive to Netflix. It does not include the microtransactions that were often criticized in the original reviews.

Here’s what you can expect from the game:

“Charge through canyons, drift across dunes, and rocket past your opponents in this extreme off-road racing experience.

Forget everything you know about racing — all you need are your instincts and a fearless desire for speed.”

“Bowling Ballers is a bowling endless runner that includes a level-based mode. Avoid objects and hit them instead of actively hitting them. Mechanics include skateboarding, flying and more, all with simple, intuitive gameplay.”

Card Blast is a simple game where you match cards. It’s got over 50 levels.

As of November 5th, 2021 the game is sitting on a 3.9 which is the highest among the Netflix crop of games that aren’t based on IP. Many reviews point to the fact it’s a fun card game albeit pretty simplistic. Others have wondered what the point is of the coins.

This arcade game has over 150 levels. The goal is to guide the ball into a hole.

It’s a simple physics game that means you only have to contend with gravity and various obstacles.

The game currently has a rating of 3.1 on the Play Store. Reviews call the game super simple and runs well but many point to the fact it’s quite difficult.

The game had been downloaded more than 50,000 times as of November 5th.

Shooting Hoops is the simplest game Netflix has ever released. It involves you trying to get a ball (or any other type of ball) through a hoops.

The concept isn’t especially engaging given that it only has a 2.8 on the Play Store right now. As of November 5, the game had more than 50,000 installed.

As of November 5, the game had been downloaded more than 50,000 times

This game was previously released by Bonus XP on October 2017, along with Stranger Things 2. Legend of Zelda games.

The tie-in was developed on a small budget, with the developers’ family members doing the QA testers’ job.

The video game, which was originally released with Stranger Things season 3, on July 4, 2019, also resembles a feature rich full game.

The game improves in almost every aspect upon 1984 and is, without doubt, the best game in Netflix’s debut lineup of games.

This game received a large release before reaching Netflix Games. It is now available (not free) on various platforms, including Steam and Xbox.

What’s been your favorite game on Netflix so far? Leave a comment below with your thoughts.

Gunzilla Games raises $46M in order to redefine the Battle Royale Genre. Players can trade their In-Game Items in “Off The Grid”