Genshin Impact runs at 13K, with an Nvidia GeForce RTX4090


It’s no surprise that the Nvidia GeForce RTX 490 Genshin Impact is playable at high resolution. But the new graphics card doubles the pixel count of the best gaming monitors. Running at a whopping 13K, the RPG game sports more detail than ever before, but trades more frames than you’d probably be willing to give even if you somehow have a capable display.

This isn’t the first time that Golden Reviewer has tried to find Genshin Impact’s limits. In October, the Youtuber demonstrated the game running at an impressive 7K with all graphics settings at max, render resolution at 1.1, and an unlocked fps limit that consistently hits triple digits.

Although Genshin is built to run on smartphones, cranking things up to 13,760 x 5,760 resolution with the same max settings at a 1.5 render resolution isn’t as forgiving on the frame rate, instead sitting closer to 30fps. It’s worth noting that this isn’t a strict benchmark and none of the footage embraces the chaos of combat, so performance might vary depending on what you’re doing in-game.

Since even the best gaming monitor doesn’t have 13K resolution, Golden Reviewer takes screenshots and zooms in to show off its astounding level of detail. The images have a resolution of nearly 180MP, according to the content creator. This is more than the Samsung Galaxy S22 Ultra smartphone. 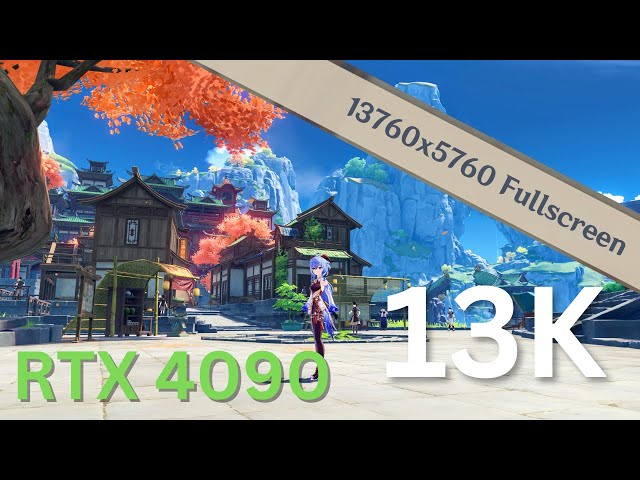 It doesn’t take the best gaming PC to achieve these feats, but your rig still needs to be pretty beefy. Golden Reviewer’s Intel i7-10700F is a couple of generations old, but the CPU still compares with the latest processors. This processor can be combined with 64GB DDR4 RAM, the fastest graphics card, and you could reach 13K resolution.