by Meta Games News
in Playstation
Reading Time: 8 mins read
0 0
A A
0

The time is almost here for Midgard and all nine realms to return. God of War Ragnarök launches on PS5 and PS4 on November 9, and I’ve had the lucky opportunity to scout ahead and go hands on with the PS5 version of Kratos and Atreus’ continuing journey.

No big story spoilers lie ahead in this article – and that’s just fine because there’s tons to talk about in terms of pure gameplay, visuals, inventive new enemies, locations, and more. Without mentioning specific characters or moments, I will say this sequel doesn’t wait long to deliver memorable, unexpected moments with a diverse cast of mythical characters. 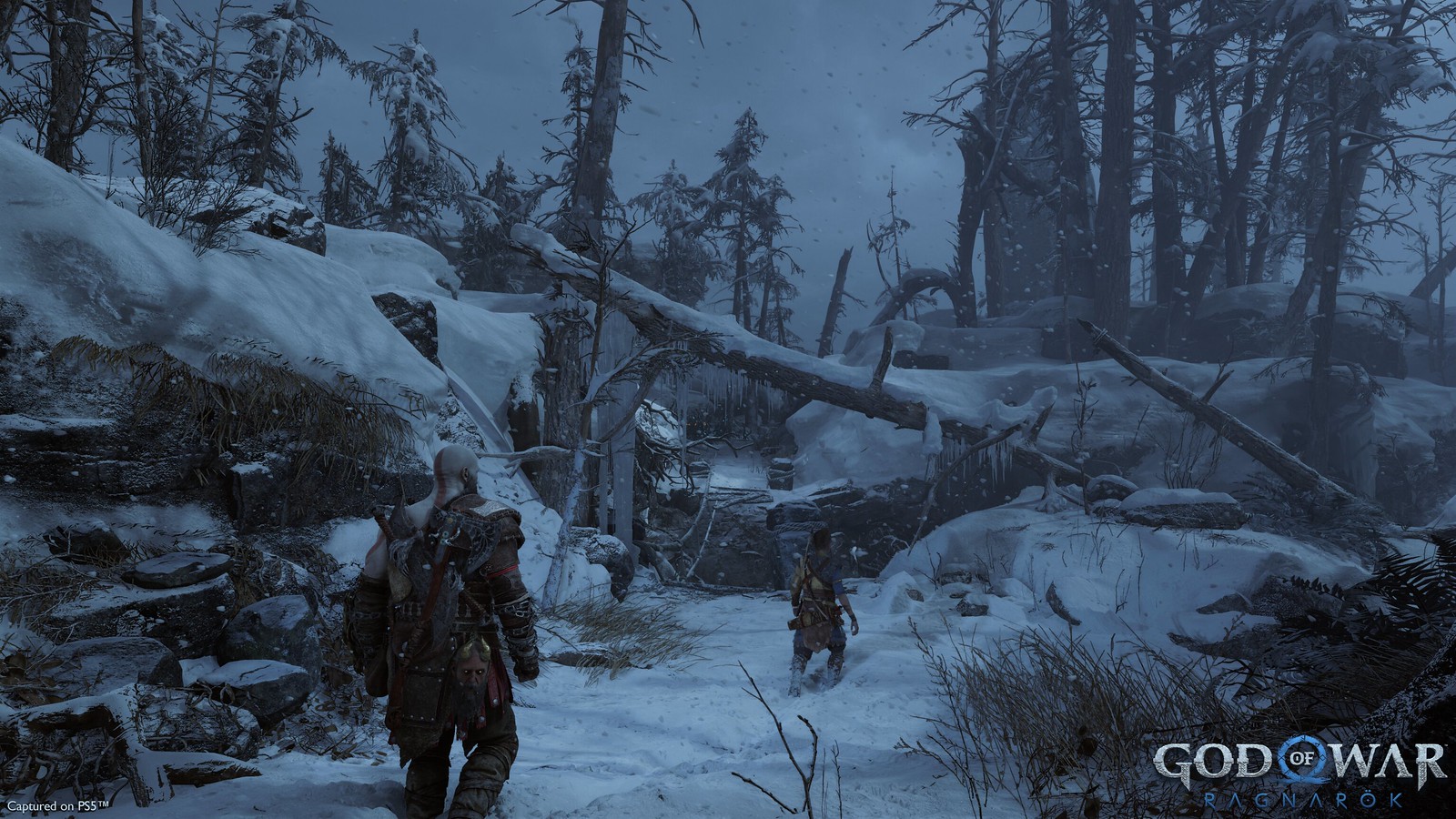 Winter wonder – The world of Midgard sparkles on PS5 thanks to crisp 4K visuals and fluid framerates (I played in Performance mode). Fimbulwinter is creeping across the lands, including Kratos and Atreus’ homestead. As the characters move through the snow, parts of it fall away and light catches small ice crystals. Frozen waterfalls are like magnificent, tall art pieces. This snow-covered Midgard perfectly captures the peaceful atmosphere of a winter walk through the woods. 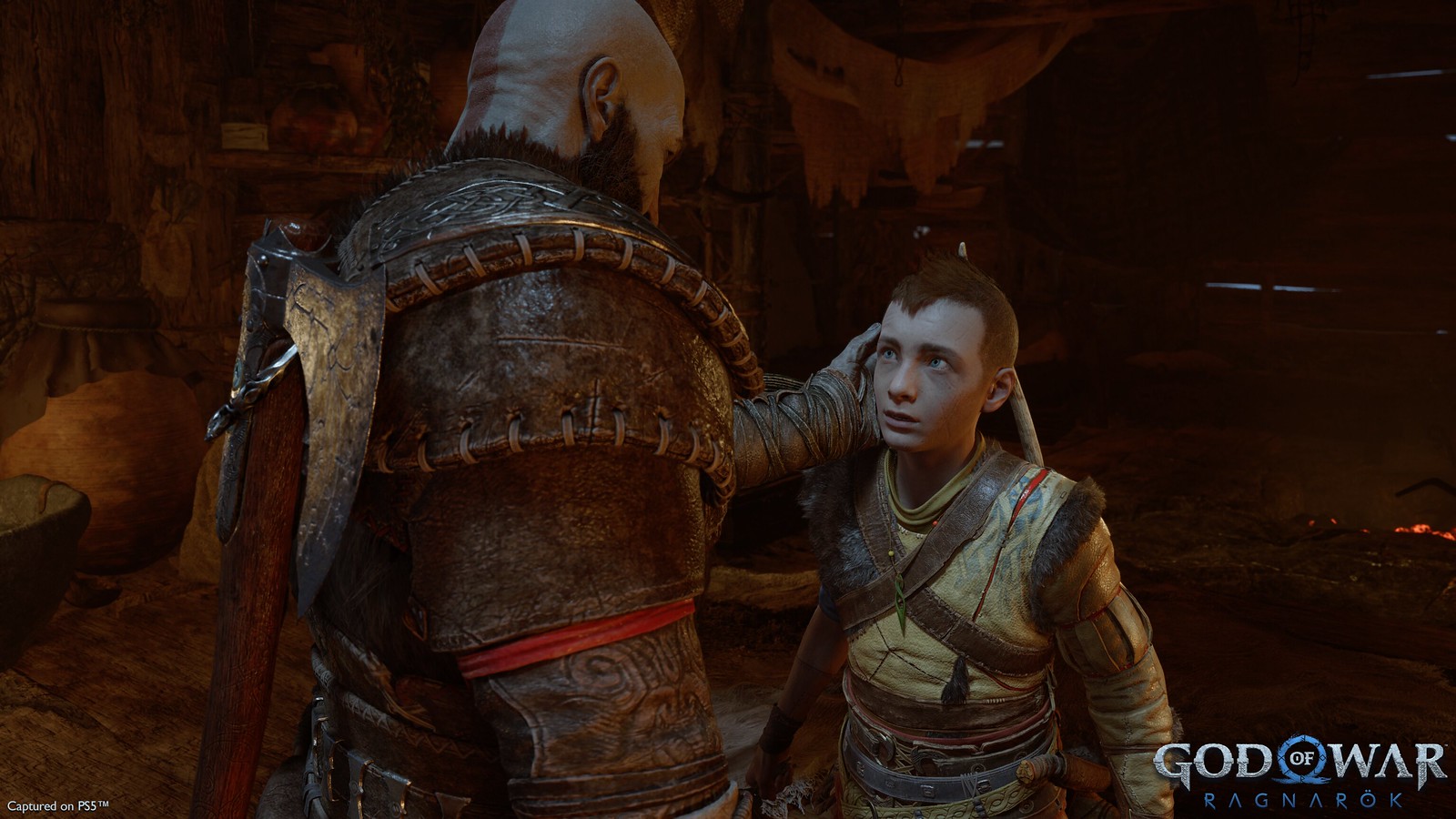 Haptic immersion – Santa Monica Studio has taken full advantage of the DualSense wireless controller’s haptics. Dogsledding is a great way to escape a severe avalanche. The DualSense controller’s haptics thrummed in my hands, conveying both a deep rumble of rushing land and lighter clumps of snow tumbling about. Combat, the Leviathan Axe packs a powerful visceral punch. When the boomerang weapon is recalled, the haptics slowly swell until it lands in my hand with a meaty sound. The range of haptics adds texture to subtle moments like Kratos lying down on his bed to sleep. 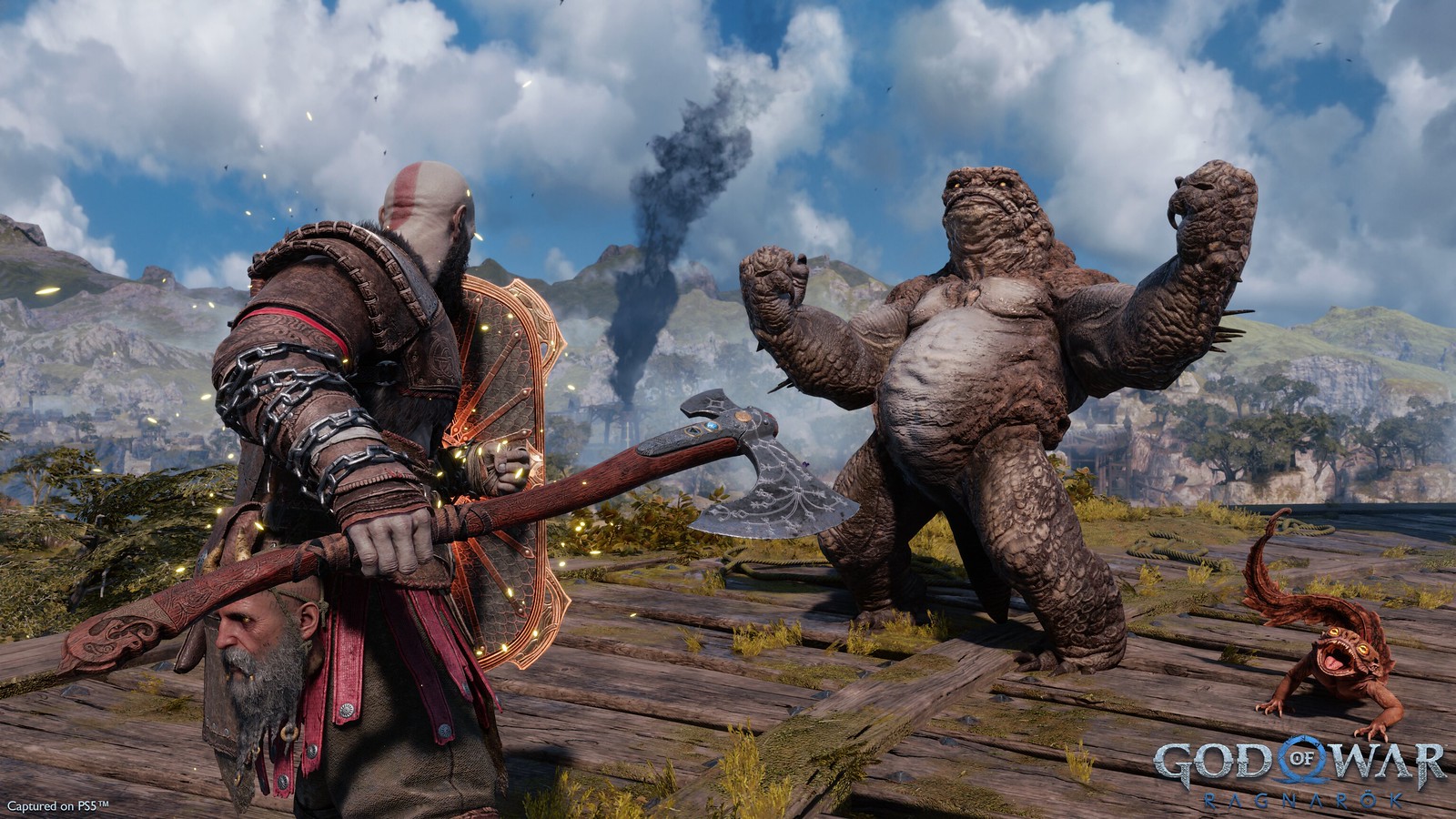 Relax and take a deep breath – I’ll admit it took me until the back half of God of War (2018) until I felt proficient with the new combat mechanics. I was overwhelmed by the intimate camera position, melee and ranged Leviathan Axes, and many combat options. In contrast, picking back up Kratos’ axe and Blades of Chaos at the beginning of God of War Ragnarök filled me with confidence and a lust for battle. Wielding both weapons at the outset encouraged me to make more complete use of Kratos’ arsenal, and it’s a blast.

Death from Above – Kratos can now take a sprinting leap off a cliff and slam into enemies below – a furious intro to any group fight that stuns enemies. The new combat option is a potent example of God of War Ragnarök’s increased focus on verticality in the environment.

Keep it frosty – The triangle button, used for equipping and recalling the Leviathan Axe, can be pressed when held to apply a Frost Awaken effect to your next melee or ranged attack. Pressing R1 during Frost Awaken executes Frozen Breach – a wide swing and applies Frost to nearby enemies. Aiming while pressing R1 during Frost Awaken executes Frozen Spike – a quick throw of the Leviathan Axe that creates a Frost explosion on impact. Kratos’ expanded range of elemental attacks injects refreshing new options into each encounter.

Flaming Blades of Chaos – Similar to the Leviathan Axe’s Frost Awaken, you can mash the triangle button with the Blades of Chaos equipped to perform a Flame Whiplash. This charges Kratos’ chained implements with fire, great for melting enemies’ icy defenses. More importantly, Kratos looks undeniably cool spinning the blade’s chain to stoke the flames.

Huldra homestead – Kratos and Atreus visit Brok and Sindi’s shop and home to gear up. I also upgraded my Leviathan Axe from level 1 to level 2, increasing its damage by a lot and unlocking new skill tree abilities. Atreus received new armor. My favorite part is the addition of a chest containing loot. Here, the Huldras store any resources that were accidentally left on the battlefield. 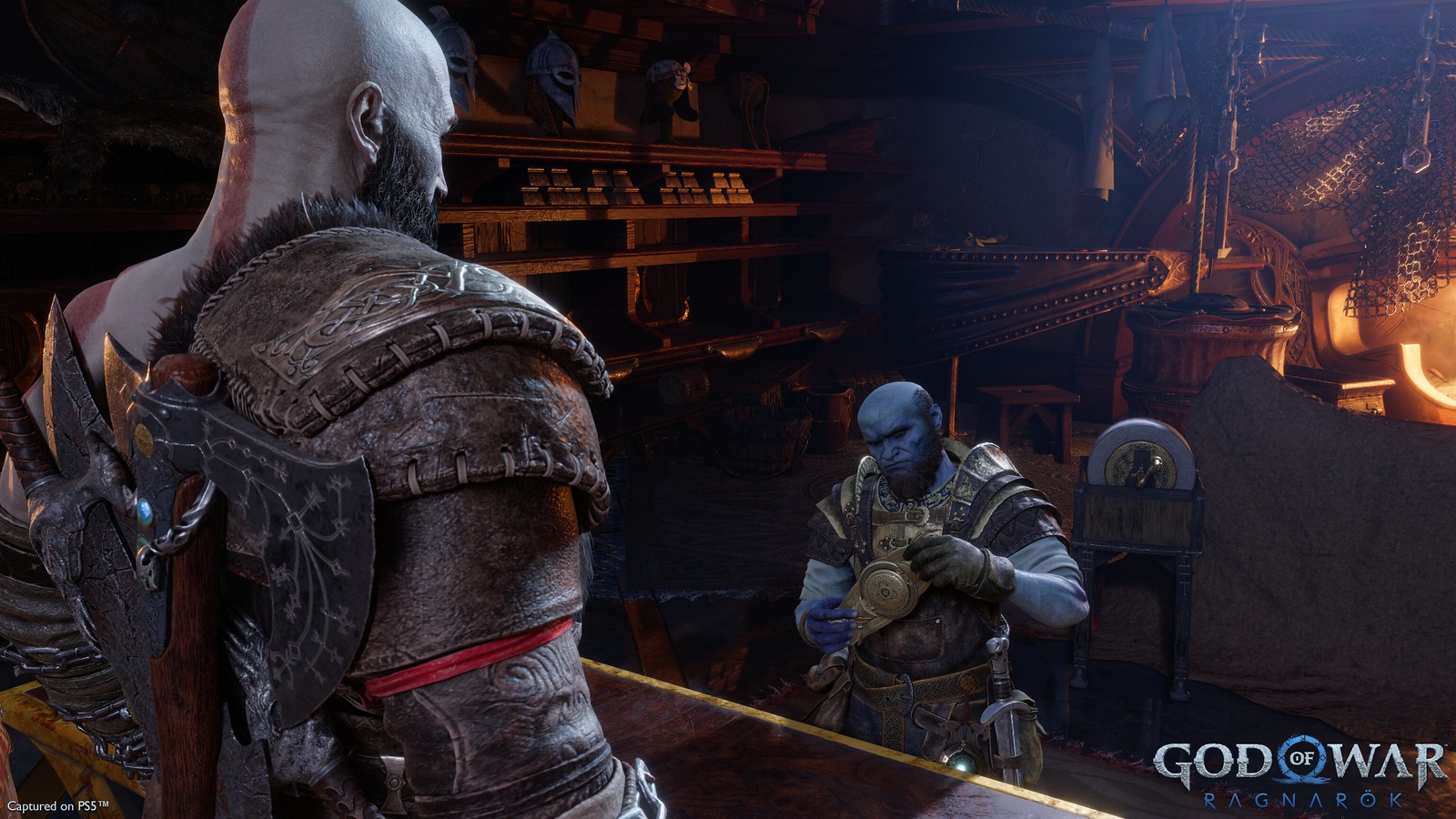 Customizing gear – Once again, you can customize your weapons and armor, including slottable gems for Kratos’ Leviathan Axe. After a battle with a ferocious stalker named The Huntress, I acquired Winter’s Bite, a light runic attack that forms a mass of ice around Kratos’ axe for extra damage. Another uses a flaming uppercut-style attack on the Blades of Chaos. These moves are great for quick escapes from jail when you’re surrounded by enemies. Keep in mind the cooldown timer.

Shield of choice – Kratos’ Guardian Shield is damaged during battle, and Brok offers to craft an additional defense while he works on repairs. The Stone Wall Shield is a shield that specializes in protecting against attacks and striking back. The Dauntless Shield is a shield that focuses on high-risk parries and high-reward parries. Players eventually have enough resources to create all their shields. 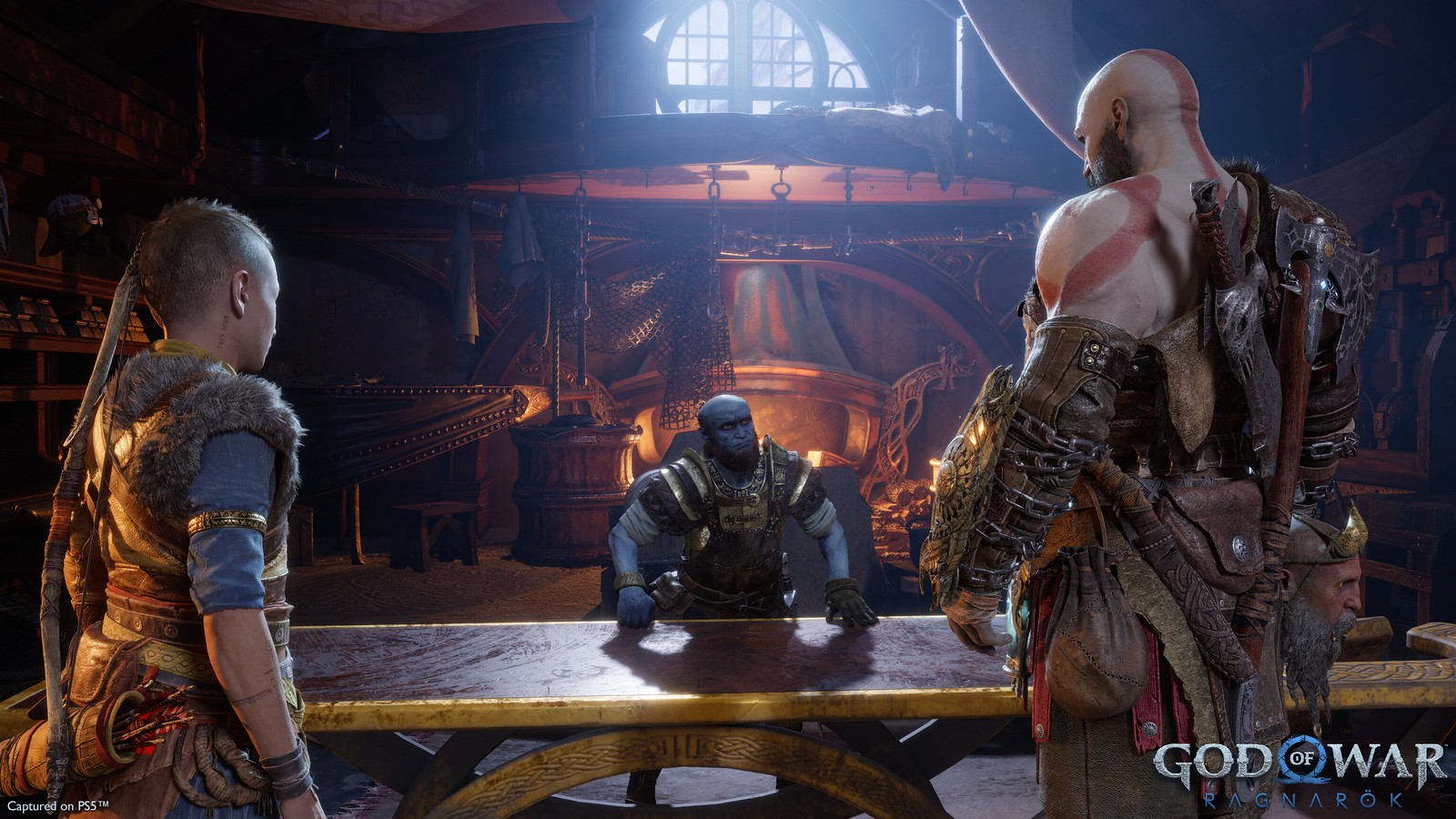 Dauntless Shield test drive – I opted for the Dauntless Shield, hoping that my experience mastering narrow parry windows in action games like Sekiro: Shadows Die Twice may come in handy. It worked! The flash of light and stunning foes that a carefully timed tap on L1 against an incoming strike produces when it is timed correctly. This was a great way to manage crowds and I love the incentive to study enemy attack patterns. 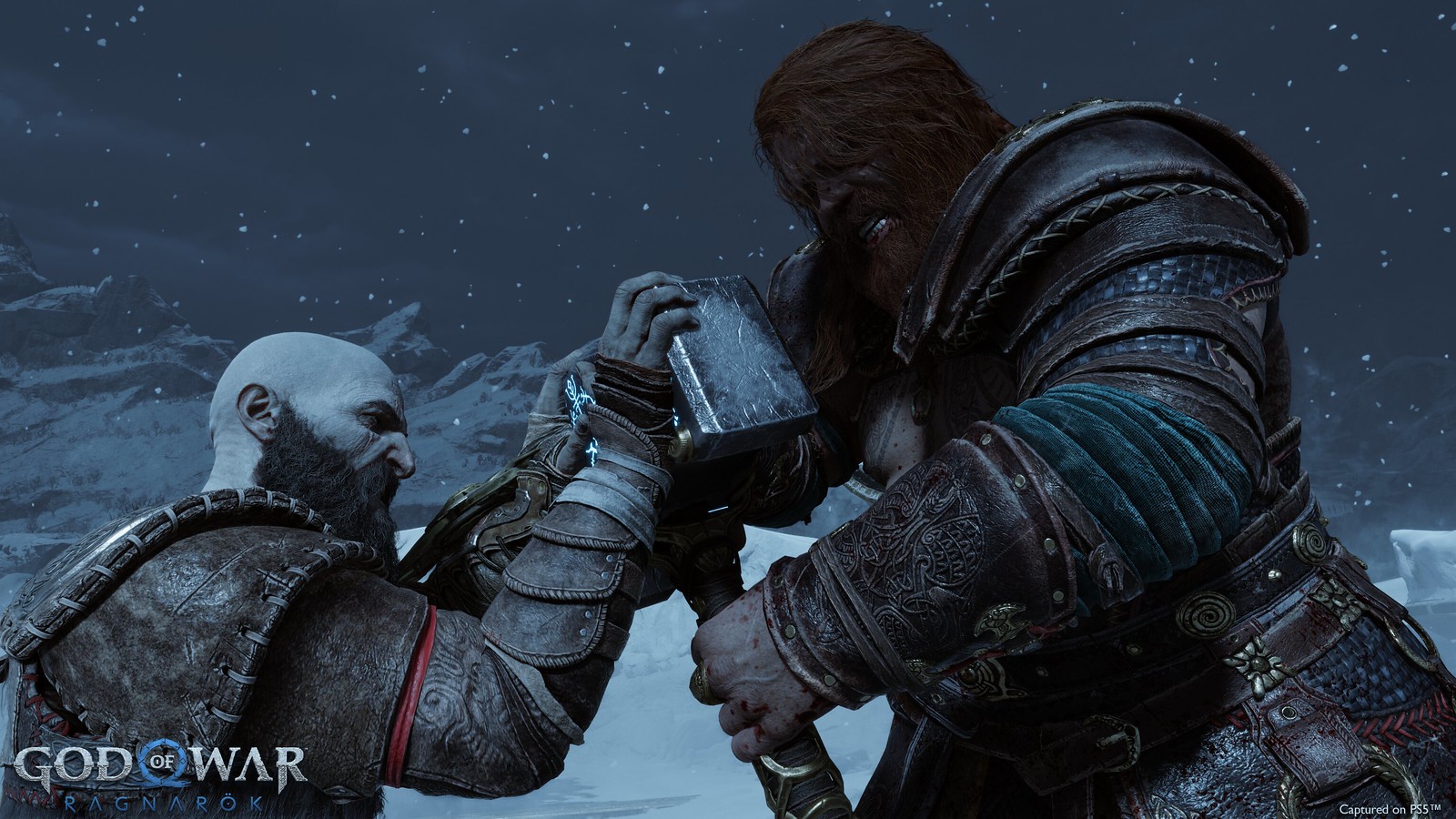 The realms are under threat

Thor throwdown – If you loved the bombastic Baldur encounter at the start of God of War (2018), look forward to clashing axe and hammer with Thor in a similarly spectacular battle. Thor unleashes a combo of grabs, lightning-infused Mjölnir blasts, area-of-effect volleys, and more. As battle rages across many frozen landscapes, the two gods grapple with each other and fly through the air. Thor’s assault is nonstop, peppering in cutting insults against Kratos’ parenting skills when he’s not outright attacking. It’s a memorable encounter that left me eager for a rematch against the God of Thunder. 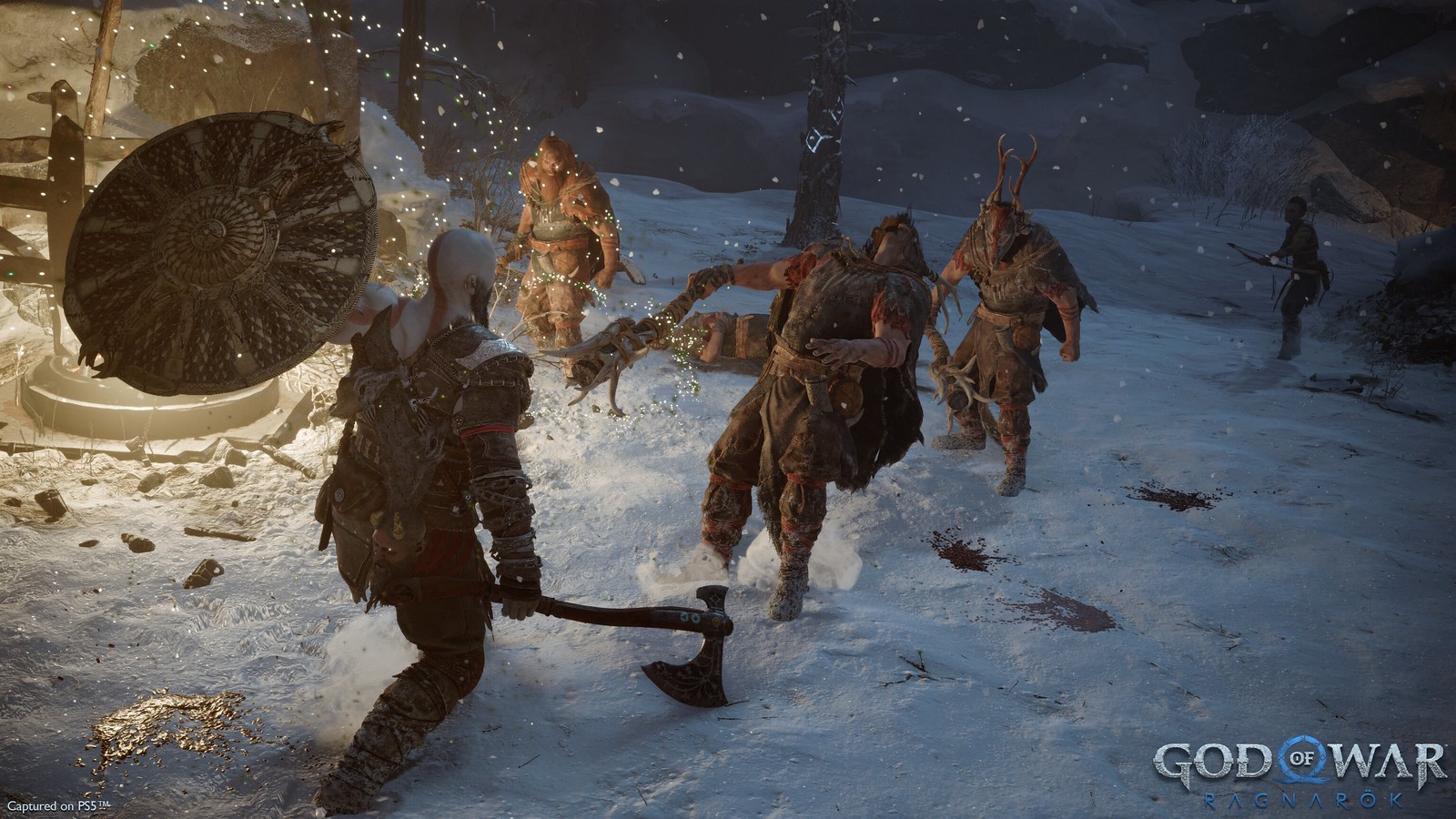 Raider rumble – Hardy, violent Raiders wander the Wildwoods, attacking Kratos because they know he’s responsible for bringing on fimbulwinter. These ranged and melee foes can be used to sharpen your melee skills, and they make great test dummies.

Björn battle – A mighty bear attacks in one of the first boss battles. The burly bear starts by swiping Kratos in a predictable manner. But, the cues also include additional cues like yellow circles, which indicate Kratos can block, but still suffer damage, and red circle, which indicates unblockable attacks. The bear’s attack pattern is a ferocious yet forgiving onramp, hinting at tougher battles to come.

Dreki brawl – One of my favorite fights from this slice of the game pits our duo against the Dreki, a crocodile-like dragon beast. The quadrupedal creature is a savage with its huge maw and swiches with its tale. It then unleashes electrical attacks that force players into a halt. Using the Dauntless Shield to parry a volley of attacks while dodging zaps feels natural and satisfying – a well-tuned fight that perfectly tests players’ growing skill with tough-but-fair intensity.

Bifröst damage – Near the very end of the preview session, a new bloodthirsty enemy type emerges to protect something deep in a dwarven mine. The pale, tattooed Einherjar unleash fierce attacks that deal Bifröst damage to Kratos – represented by a purple section of the HP bar. Bifröst damage is harmless at first but when these foes hit a second time it detonates the affliction and slices a significant chunk off your HP. Watch your back, dodge readily, and be ready to parry to survive weaponized Bifröst. 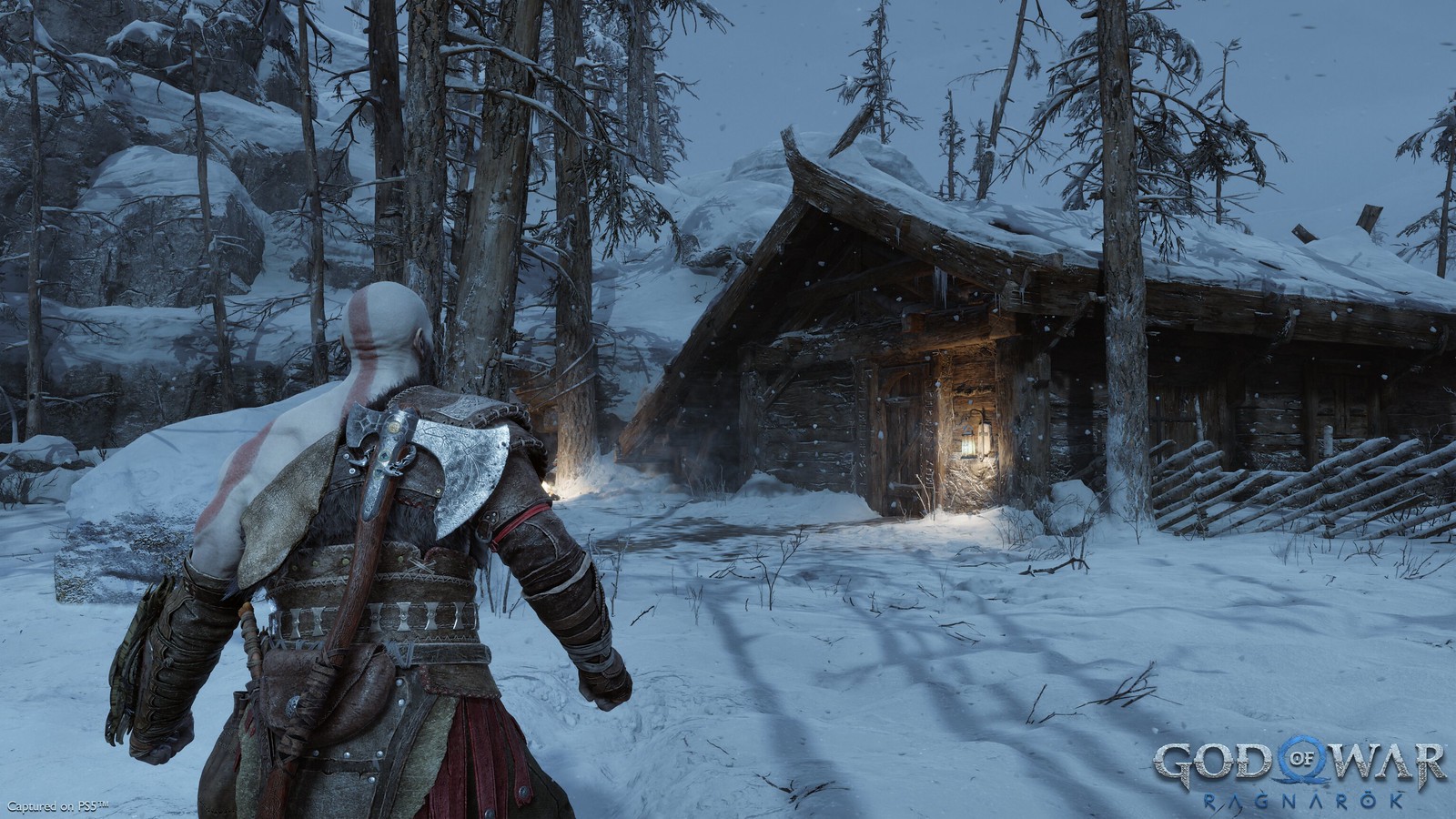 Realm lockdown – Odin has the realms cut off at the beginning of God of War Ragnarök, so Kratos is unable to use the Bifröst to travel. Brok and Sindri have rearranged the mystic gateways to provide an alternative method of travel. 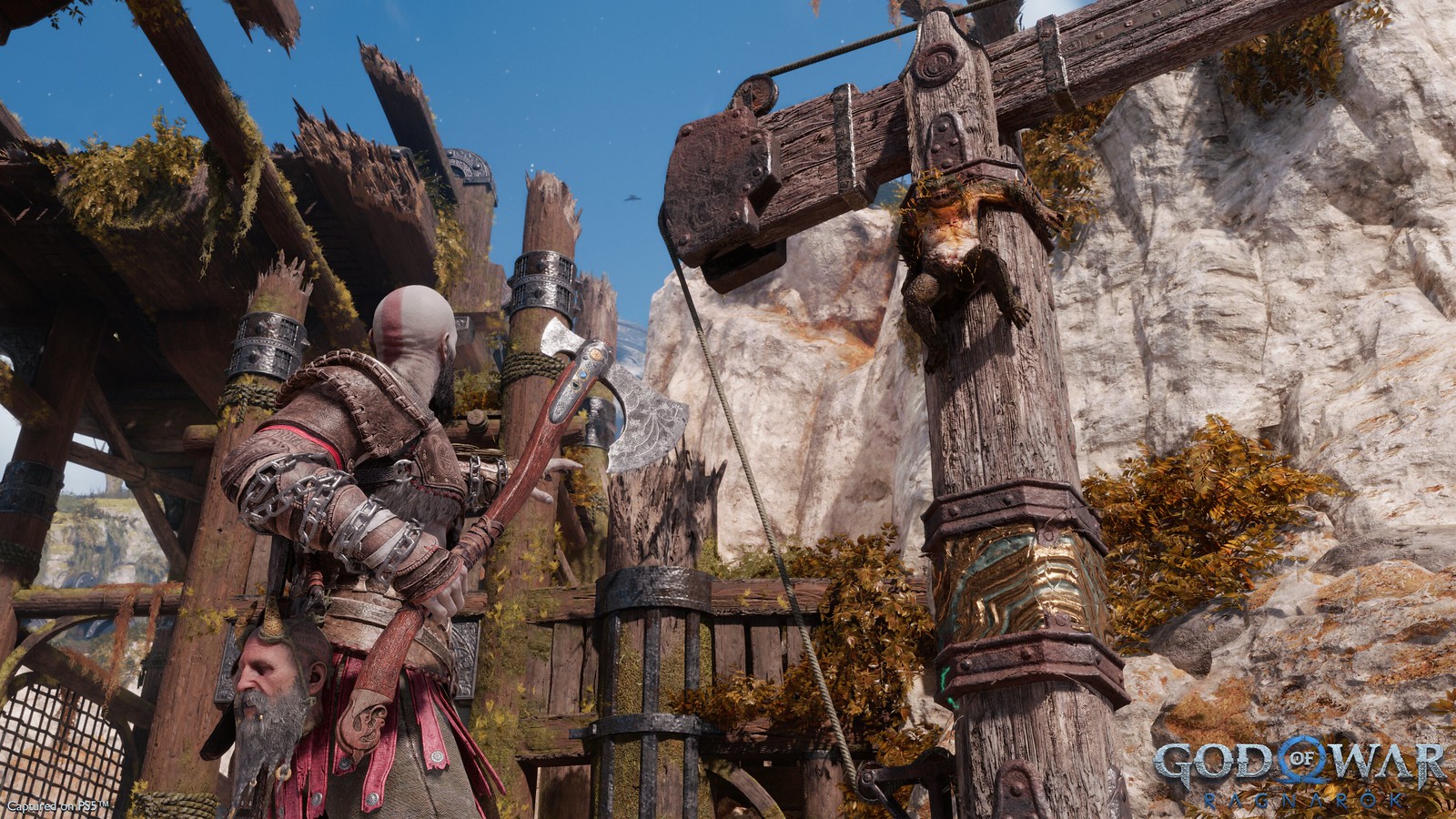 Wintering in Svartalfheim – While Fimbulwinter has enveloped Midgard in cold and snow, it’s had different effects on other realms. For example, in Svartalfheim, the subterranean pressure has increased and pocked the land with powerful geysers. Mimir (the wise, talking head strapped to Kratos’ belt) also mentions a potent odor has spread across the land.

Puzzling platforming – Navigating the realms requires clever use of Kratos’ implements. I had to move a blockade pillar in one case. To move the pillar, I first had to use the Leviathan Axe on the log to smash it down. Then, I used the Blades of Chaos to disarm the pillar. Another example involves crafty use of the Leviathan Axe’s elemental properties to manipulate watery obstacles in the realm of Svartalfheim… but I’ll leave that to you to discover. 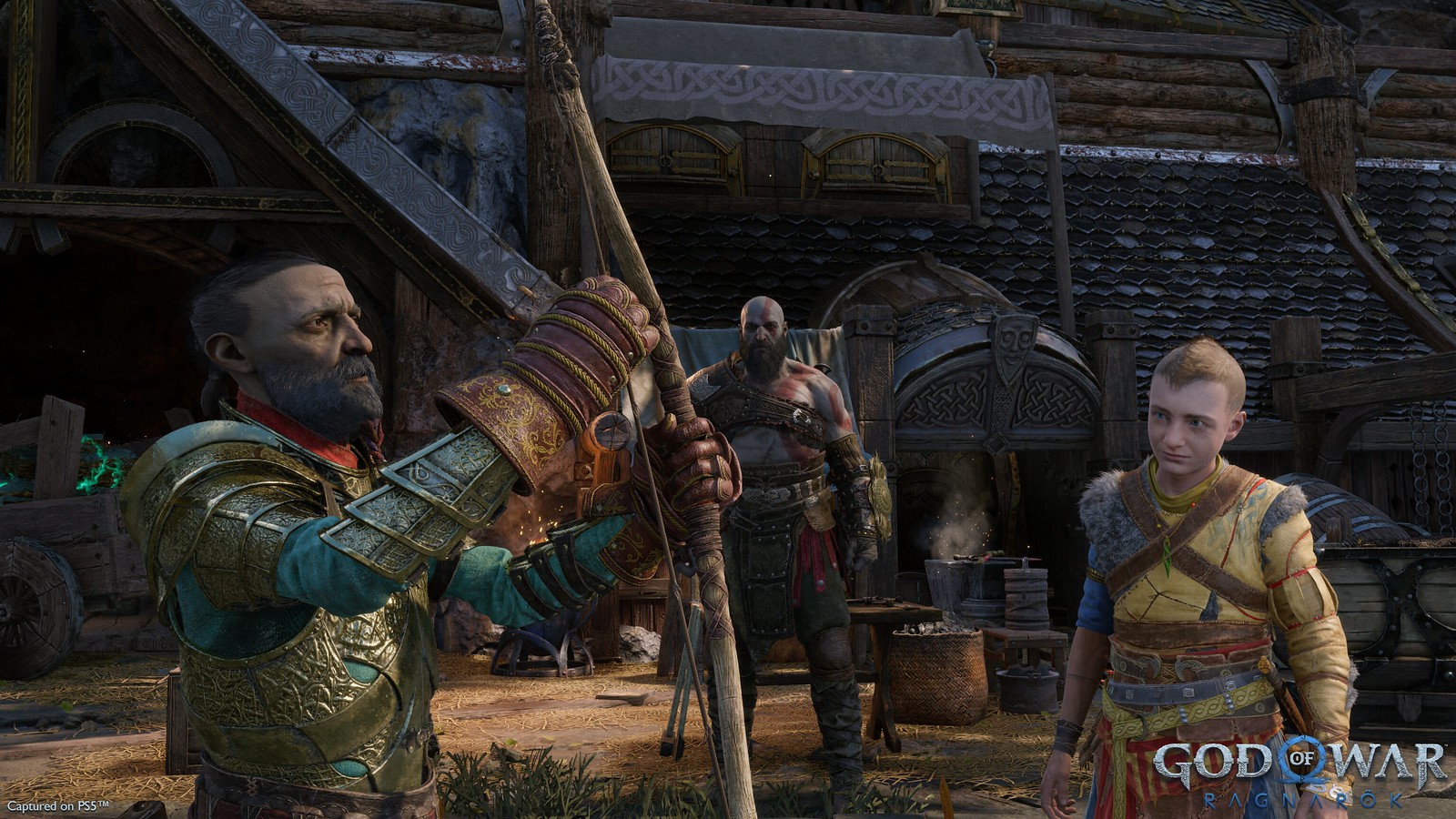 Sonic arrows – In the dwarven town of Niðavellir, Sindri equips Atreus’ bow with a new sonic-powered string. This enhancement allows you to blast apart objects, pulsing in a light blue-green around the environment. Atreus’ ability to destroy this glowing material injects a deeper layer of joint environmental puzzle-solving and navigation for the pair. 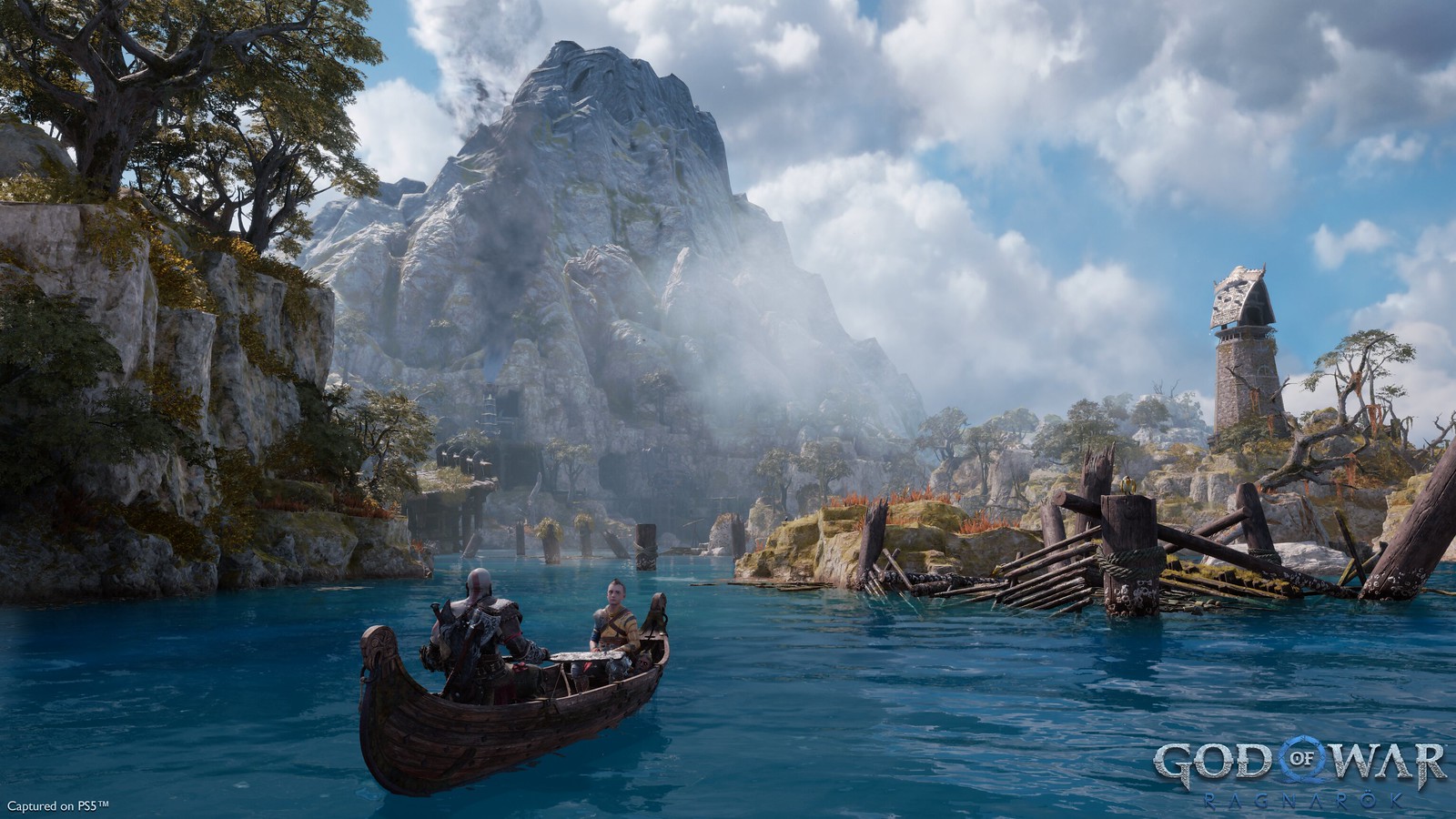 Exploration and side quests – Fans who adore turning over every stone in the realm can rest assured that exploration is abundant and rewarded in this sequel. Atreus, Kratos, and Atreus are able to meet a dwarf with Mimir’s history while wandering through a charming but uninviting town of dwarvens. According to the dwarf, mining rigs once supported by Mimir have created a mess in these lands. If players choose to pursue this Favor, they can correct Mimir’s past wrongs for a reward. Later, while paddling a canoe across a large, bright blue lake, I noticed pillars of smoke coming from these mines. I decided to continue on the main quest path, but Atreus assured me that we could return later to complete the Favor.

Dwarven Compass – Sindri bestows a “beautiful gift” upon Kratos – a compass that allows players to track objectives on the map, then follow a compass at the top of the screen towards their destination. This is a great way to efficiently track objects such as Favors or other side quests.

The opening hours of God of War Ragnarök are jam-packed with exciting story moments and top-notch combat encounters. These are just a few of the details that make me excited to explore the worlds and discover what fates await our heroes.

Not long to wait now – God of War Ragnarök launches on PS5 and PS4 November 9.

How LunaOne is Challenging The Metaverse Game - Alphabet, Meta Platforms