Explore the Mountain Everest Max Review The keyboard has changed the way I think about gaming keyboards. It stands out from the rest with its unparalleled customisation and unique design. The complete package is nothing short of a Twitch streamer’s dream, baking elements of the Elgato Stream Deck into its DNA. While the Everest Max stands at the summit of the Mountain range, its modularity makes it a more affordable path for those who don’t want to pay the full price.

Mountain does a lot to convince you that Everest Max is the best gaming keyboard on the market. It has a quality that makes it seem like the device was created in the ashes of crowdfunding. Unboxing it is treated as a red carpet event, with magnetic latches, a cabinet’s worth of draws for its accessories, and packaging you won’t want to throw out.

The Mountain Everest Max’s individual features are not new. We’ve already seen plenty of keyboards with hot-swappable mechanical switches, some with a detachable screen, and others with a numpad you can chuck to the left. This is the first time we’ve collectively seen them all in one device, though, as the Everest Max perfects the Swiss Army knife approach. 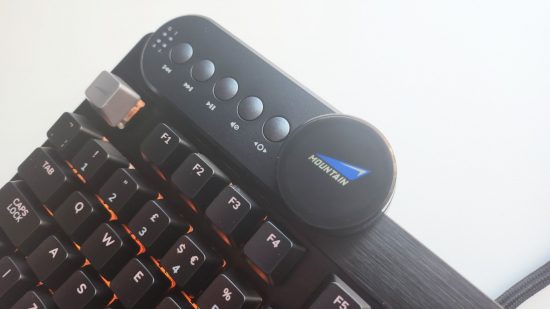 With most keyboards, you’re stuck with what you’ve got unless you replace the entire thing, but that’s not the case with the Everest. If you can’t afford it all in one lump sum, you have the freedom to start smaller and build your way up until you’re kitted out with everything you want. As its name suggests, the Everest Max comes with all the trimmings for $249.99 USD / £249.99 GBP. If you fancy shaving some of that cost down, you can instead grab either the Everest Core Barebones (a tenkeyless shell without mechanical switches) for $129.99 / £129.99 or the Everest Core (a TKL model) for $149.99 / £149.99, and add the accessories later down the line.

Our test model features a black-milled aluminium finish with Cherry MX Brown switches in the UK ISO format. You have a variety of configurations to choose from. There are ten regional layouts and five Cherry mechanical buttons. Mountain’s very own Blue Tactile 55 switches impressed us in our Mountain Everest 60 review, so it’s a shame not to see them come as part of the package, but you can always grab a set separately as they’re hot-swappable with three-pin switches.

Mountain includes a confusing swarm of USB ports, but disappointingly only the single Type-A is a passthrough you can use however you’d like. Only the USB-C ports on Mountain work with the media Dock. The USB-C ports either side of the keyboard only work with detachable numbers, and the one underneath provides power. The routing system on the underside is one of the best I’ve seen, going a long way to help you manage cables so you don’t end up with a spaghetti situation in your PC setup.

The RGB lighting is uniform between Everest and its Numpad. It shines per key, but also highlights the edges with a strip. You’ll need to turn up the brightness in the Base Camp software to get the most out of it since it’s dimmed by default, but the colours are vivid and pop through the ABS keycaps.

The numpad goes a step further than any we’ve seen before, as Mountain places four LCD buttons across the top. They’re not as spongy as the Elgato Stream Deck, but work much in the same way with functions and icons you can customise in the Base Camp software. This feature alone is well worth the Everest Max. 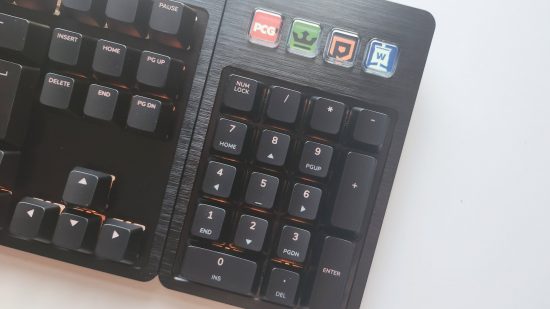 Mountain has a layer made of sound-dampening foam. This makes it a pleasant experience to type on the Everest Max. I don’t find its pronounced click quite as satisfying as the Everest 60 with the same switches, but acoustics are a personal preference and depend on several factors in your PC setup. Regardless, it’s among the best Cherry MX-laden boards and doesn’t disappoint.

The Everest Max, as a Kickstarter original backer, has been my keyboard of choice since 2020. It is also the one that I keep coming back to between reviews. Its magnetic memory foam wrist rest isn’t quite as plush as others I’ve used from Razer and Asus, but it’s comfortable. I’m less of a fan of the Everest forgoing flip-out feet in favour of magnetic discs, though, as while they offer more stages for a more incremental incline compared to the usual two-step, they’re easy to lose and less than ideal for travelling.

I’ve long advocated for plonking the numpad on the left-hand side for more mouse space, but the quadruple LCD keys drive the point home since it makes them easier to reach. They’re best suited in the hands of streamers with Twitch and OBS integrations, but the buttons also make shortcuts and launching your favourite games that much easier. 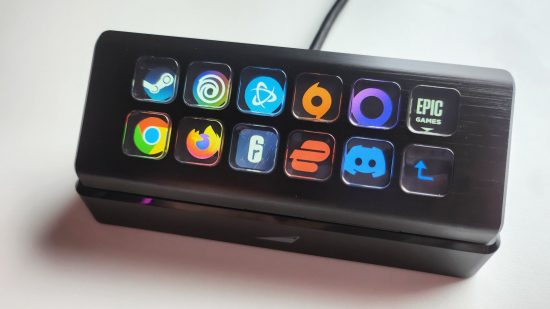 If four buttons aren’t enough or you’re not sold on buying the full keyboard, then the DisplayPad and MacroPad are probably more your stride.

The DisplayPad is a standalone 12 key version for $109.99 USD / £99.99 GBP, which is cheaper than the Elgato Stream Deck for near-identical features. The MacroPad strips the cost down to $59.99 USD / £49.99 GBP with 12 screenless mechanical keys. The MacroPad can be used with any keyboard you already have, with no strings attached. But if you pair them with the Everest, the stand can be removed by hooking on the back and using USB to power.

The media dock isn’t just a convenient attachment that gives you playback shortcuts, as its IPS display is a ton of fun to play with. It tells the time, monitors your hardware, and yes, you can customise the background with pretty much anything – like a shameless promotion of the PCGamesN logo. It’s a whole lot more functional the Mad Catz Strike 7 was back in the day and doesn’t carry the same premium as the Corsair iCUE Nexus, but you’re stuck with the built-in options since it doesn’t have the same modding community as the Logitech G15. 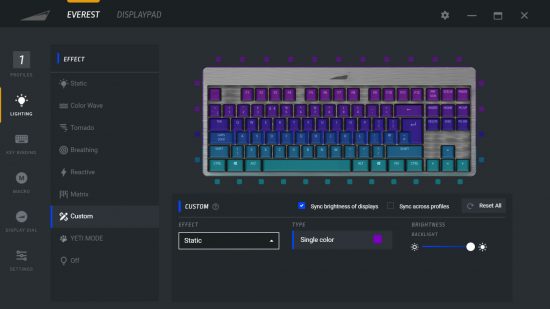 Base Camp software has evolved a lot since its initial release. The software offers many options and is packaged in a beautiful package. Here, you can set up macros and different keybindings, customise what’s on the display dial and LCD buttons, sift through the settings, personalise the RGB lighting, and create up to five different profiles. Five profiles might not seem like much, and it still lacks game detection to automatically swap between what you’re playing, but these profiles are stored on-board so you’re less reliant on the software being active.

I still take issue with the name, as the mountaineering theme doesn’t mean it’s easy to remember if you don’t pin it to your taskbar or desktop. I personally use the Windows Start Menu to open programs, but Base Camp doesn’t appear when typing in ‘Mountain’. It increases the learning curve and makes it difficult to remember the name. This can be especially frustrating when your setup includes products from multiple companies with their respective programs. The software also isn’t available for macOS or Linux, meaning it isn’t the best to pair with a Steam Deck unless you’ve installed Windows.

Base Camp has improved a lot over its initial state and is now quite sturdy. Base Camp is now much more responsive and doesn’t crash as often. When you select different Mountain devices, the corresponding product flashes so you’re aware of what you’re customising, which is a neat touch. 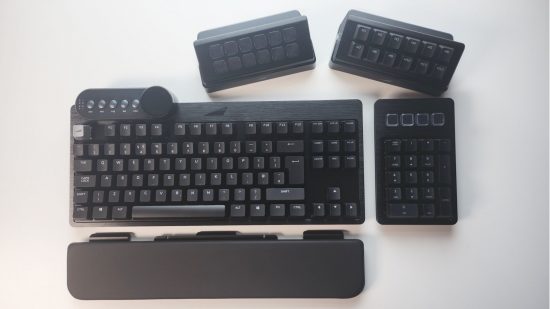 At $249.99 USD / £249.99 GBP, the Mountain Everest Max is a big investment, but it packs enough value that you could consider it a steal. The only features it’s missing are optical keys and a wireless connection, which might give the Asus ROG Claymore II the edge. The Everest, however, lets you pay your own way for the features you choose, which is a big advantage over its competition.

For the brand’s first-ever keyboard, and a Kickstarter project no less, the Everest Max is a home run. Mountain is also learning quickly what customers want. It has its own switches and a great 60% keyboard. So very rarely has a new company excited me the way that Mountain does, and I can’t wait to see what comes next.

A modular keyboard like no other, packed to the brim with accessories that are nothing short of a Twitch streamer’s dream

FFXVI is a PlayStation 5 Exclusive for 6 months

The List of Mars Tokens (MRST), Unveils Cryptocurrency Trading Platform OKX as The Only Primary Listing

The List of Mars Tokens (MRST), Unveils Cryptocurrency Trading Platform OKX as The Only Primary Listing

Review of 'Sonic Frontiers: A Bizarre and Cathartic Sequel