So, You Wanna Play Junker Queen?


Overwatch has over 30 characters that each play differently and similarly to one another, this makes strategizing critical to a match’s success and could make all the difference between a blowout or a close call overtime victory.

Overwatch 1 changed the tank meta. It went from having two tanks to one and then to one. Major reworkes like Orisa have also been done. This makes it easier for new players to compete with OG Overwatch players.

Junker Queen was the newest tank to join the fray at launch. A character that was teased years ago by a lot of name dropping (mainly when it came to JunkRat or Roadhog stories), she can be a problem in the right hands. She can even set up multi-kills to their DPS (Damage per Second) teammates.

Let’s now talk about the royal highness of the Apocalypse. And how you can bring her pain! 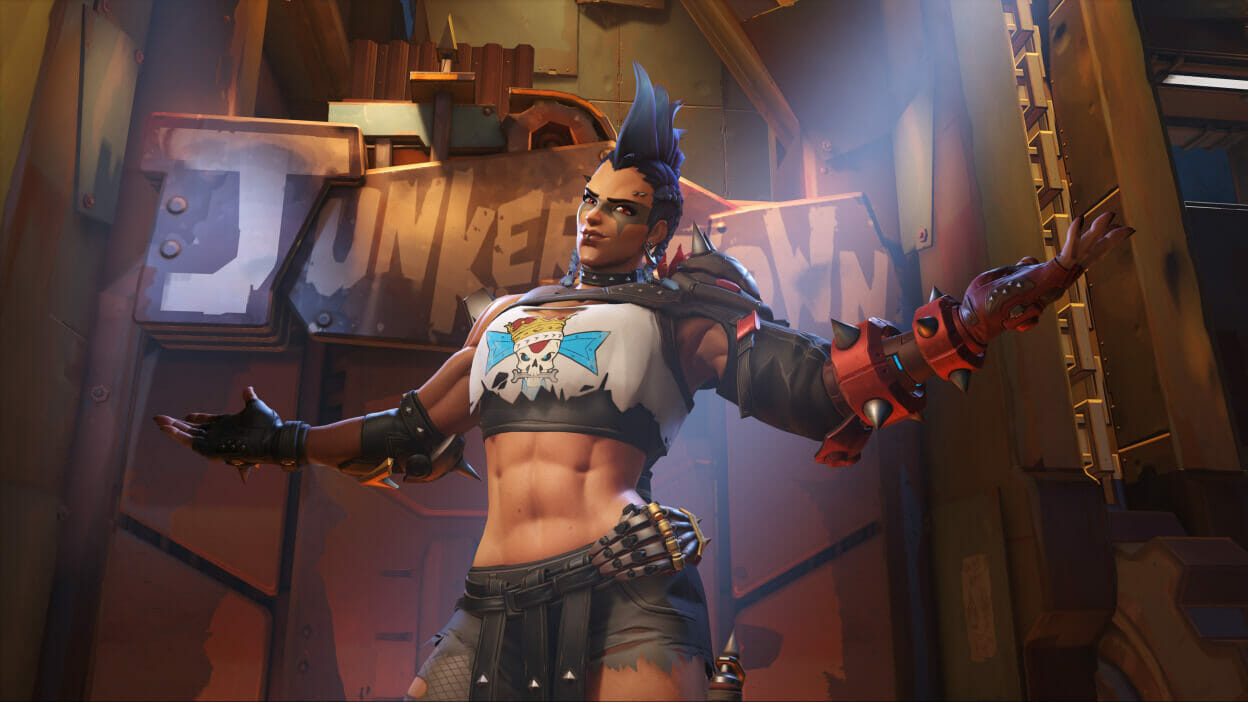 Junker Queen made her first appearance as a playable role in Overwatch 2 season 1. She is equipped with big tank boots and is able to compete with more familiar tanks such as Doomfist, D.VA, and Doomfist when it comes frontline combat.

Tanks are good at drawing aggro from their fellow tanks and taking large amounts of damage. However, there are tanks that excel at defense while others can do DPS with high levels of health. Junker Queen is certainly the latter.

Doomfist, D.Va, and Doomfist are excellent at charging into battle and causing injury, and they also excel at distracting and drawing aggro from enemy players. Junker Queen is a good example of this trend, as she can attack and disrupt her opponents in multiple ways.

It is all situation-based and all depends on what game mode you are playing. Before we get into mode situations, we’re going to talk about Junker Queen basics.

Junker Queen is equipped with a pump-action shotgun that can fire six shots before the gun needs to be reloaded. The Scattergun, which can be used up to six times, has decent range and can be brutal up close. This can help to push other players back, as many will attempt to avoid close encounters.

The Scattergun has one real flaw: the low ammo counts. Junker Queen characters can easily be caught off guard when they encounter a DPS character with high mobility.

The Jagged Blade is next. This knife is Junker Queen’s most powerful weapon. Once you have a good feel for timing, it can be used to great effect. The blade is thrown at opponents and will stick to them upon contact and cause a ‘bleeding’ affect, slowly draining a small amount of health. You can call your opponent back by pressing the same button as you did to throw the blade. Then you can pull them towards you using the Scattergun.

Even if you miss your target initially, the blade will still cause bleeding to any enemy players that get caught in the blade’s path back to you, this gives Junker Queen players a way to trick enemy players into thinking that they may be getting attacked from the rear.

Carnange is the giant ax Junker queen carries on her back. When used, it will cause bleeding effects similar to the blade.

Carnage has one major flaw. It takes time to wind up, which is different from the blade. Players are locked in until the animation is finished. This leaves Junker queen vulnerable to enemy attacks.

Junker Queen and all allied with the radius can use Commanding Shout to gain a temporary movement and health boost. This ability can be very helpful to save an ally who’s low on health while waiting for healers or a great way to quickly get your team back on a control point.

The cooldown for this ability is fifteen seconds. Players will need to be careful when and how they use it. Junker Queen could either hold a point long enough to allow her team to respawn, or get trapped in a corner without any way out.

This ability causes Junker Queen to move forward and inflicts injury on any enemy she encounters, like Carnage or the Jagged Blade. What makes Rampage so dangerous is that it temporarily prevents opponents from healing or being healed. 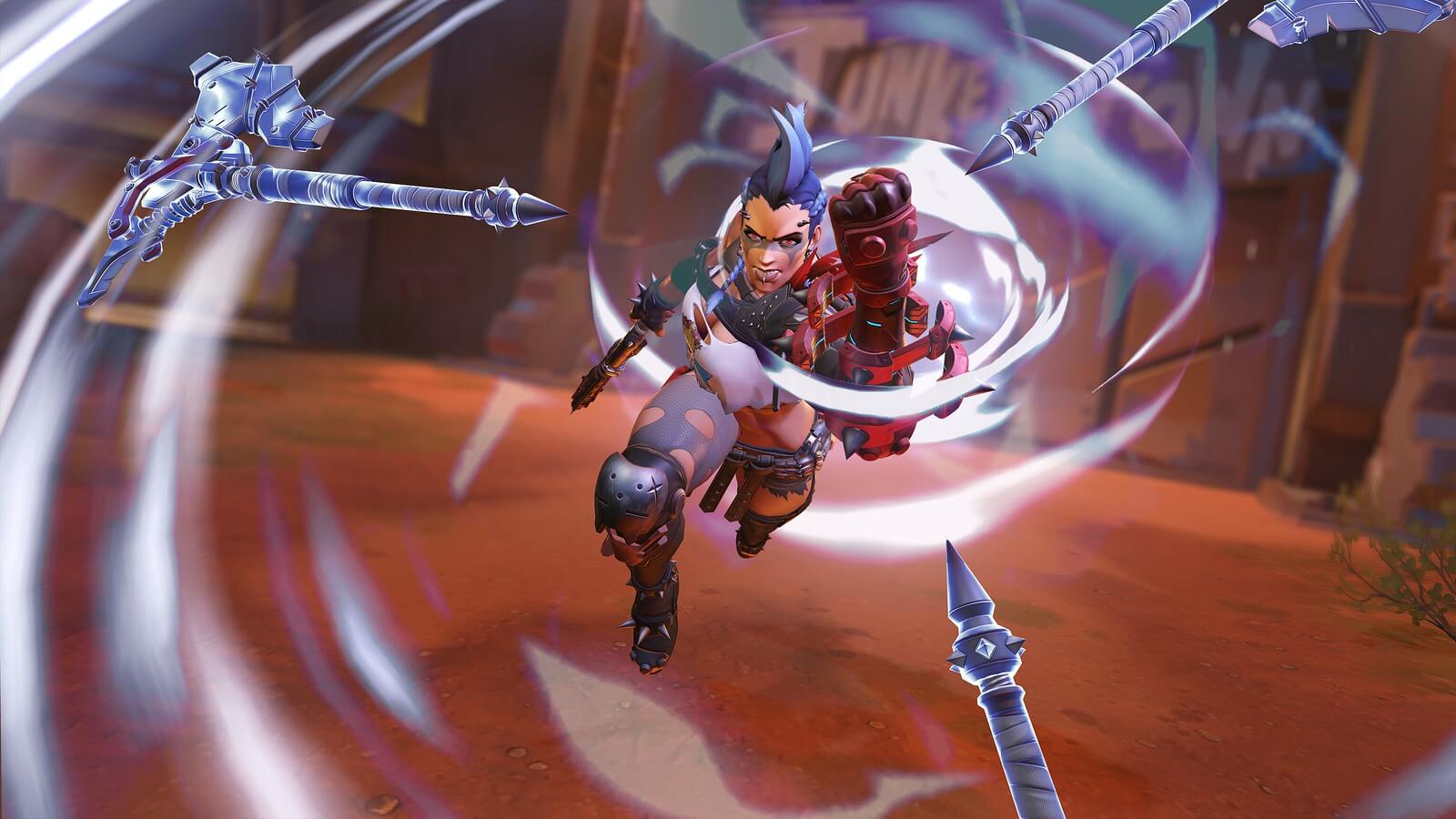 Let’s now look at the Junker Queen in a variety of ways.

In both escort and hybrid mode Junker Queen is a real problem, and that’s due to characters needing to be on the point in order to move/claim it, they are forced to be somewhat close to Junker Queen and her terrifying ax, in these modes players are going to want to play very aggressive and scare enemies away from the objective.

Players should make great use of Carnage and the Jagged Blade against tanks, this will help throw them off as they will want focus on getting rid of the character that can drain their health, DPS will try to avoid Carnage and healers will run as they don’t want to meet the end of the Jagged Blade.

While attacking it’s key to quickly draw aggro and draw tanks away from your teammates, the first push can set the entire feel of the match, if the defenders get a foothold with holding your team back, chances are that they will keep the onslaught going.

Good defending teams will keep their healers on the watch for the tanks. Use the Jagged Blade to deal damage from afar while still drawing attention to your own tank. Due to their low health healers are more likely fleeing and leaving their tank vulnerable.

Use Carnage on tanks to make up for the damages you may have missed out on due to healers’ intervention, tanks are more likely to face off against Junker Queen to keep her from picking off their DPS.

Junker Queen, unlike other tanks, can really put the pressure on the opposing team to keep them from reaching the objective. Because she is able to attack from both close range and long distance, she can also suppress opponents at their point of spawn. Orisa Winston, Wrecking Ball, and Winston are other tanks that have this ability. Depending on your player skills, these characters can be used to suppress enemies at theirspawn point. 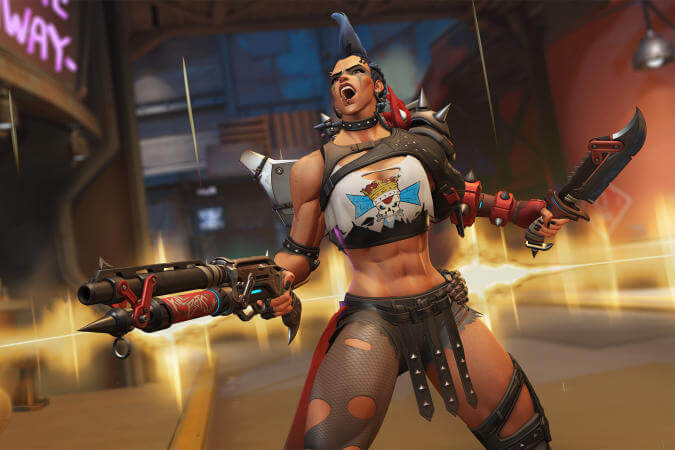 As you get used to Junker Queen, players need to first identify who their healers are. Junker Queen’s most dangerous pair is Zenyatta/Mercy. You can experiment with Carnage and getting closer to your opponents while trying to master the game. You can defeat multiple enemies by timing your axe correctly during the crucial last seconds of the match, when everyone congregates around the objective in an attempt to end it.

Aggressiveness will make your opponents fear you and help your team to push forward. However, what about defending?

This strategy works for both attacking and defending. Do you remember Junker Queen being one of the easiest characters to suppress spawn points? That is your first move. Take the wind out of your opponents’ heads early with Jagged Blade, Carnage, and choking on their health.

Now that the opposing team knows you’re going to be aggressive, they’re going to try to focus on taking you out as early as possible, this distraction will give your DPS teammates the optimal chance to really hit them and cause frustration.

When it comes to other modes like push and control things change up a little bit, in these modes your opponents can move around a little more freely once the point has been captured, in these modes it’s very easy for your team to get separated and leave Junker Queen to fend for herself as the healers have to move around much more to try and protect the DPS.

These modes tend to keep healers in the back because they have more room to retreat and get support. Junker Queen players will need to be more careful when attacking healers. The Jagged Blade is the best option in these modes.

You should not throw the Jagged Blade like Hybrid and Escort. It will help you heal quail, but it will also be used to punish DPS players who are attacking you from close range.

You can ignore tanks in control mode. Instead of ignoring them, get rid of their support, DPS, and healers. Their tank is dealing heavy damage upfront so you should keep them out of your reach. Junker Queen, with her aggressive abilities, can interrupt this and cause the tank to flee. Your team will then have the chance to do some serious damage to the lone defender.

It’s time to talk about countering the Queen, it’s important to know what characters can put an early end to Junker Queen’s reign, with this you can take on the Queen or avoid costly mistakes.

Junker Queen can be deterred by mobility characters. If she is rushed with a high mobility character such as Moira Genji, Lucio, Sojourn or Lucio, it can cause her severe headaches. It can also distract her from going after your team or even buying your tank some time to get to you.

Junker Queen may be able to attack with DPS, provided you have the right character. Junker Queen players can notice Sojourn’s ability to move quickly, and deal damage even more quickly, which can draw their attention. Junkrat’s ability to lob his grenades at great distances along with the ability to launch himself to safety will also keep players on edge.

Junker Queen should be forced to use her Commanding Shout fast. This signals to your team she is in her last legs.

Here’s a list of characters to use/avoid when it comes to Junker Queen:

You now have an understanding of Junker queen and can rule the wasteland. However, this is only season 1, so Blizzard will continue to change heroes and abilities all the time. Keep your eyes open for official announcements by Blizzard about any characters.

If you enjoyed this small guide to Junker Queen let us know in the comments, and if you want to see me be absolutely terrible at Overwatch 2 you can find me on Twitch where I put on a brave face and pretend that I know what I’m doing, you can also follow me on Twitter.

New research has revealed the most popular video games on social media in 2022 – from Elden Ring to God of War Ragnarok. – European Gaming Industry News

There are clear signs that your customer service is lacking

New research has revealed the most popular video games on social media in 2022 – from Elden Ring to God of War Ragnarok. – European Gaming Industry News

Redesign the Prius to Look Cool