Fans who enjoyed zipping around WoW Dragonflight’s alpha will be disappointed when they learn that a Dracthyr Soar nerf has been implemented to drastically slow the speed at the new race can fly in the MMORPG. In addition, plenty more changes are coming to the Dracthyr’s unique class, with a range of Evoker tweaks aiming to fine-tune the newest World of Warcraft class in line with player feedback.

The maximum speed of Dracthyr Soaring ability will drop from its current 930% to 640% with the next Dragonflight Alpha build. That’s a pretty heft change, cutting around a third off the speed bonus offered by soaring. Blizzard says that this change has been made because the Dracthyr’s racial ability is available everywhere, and as such there will be no change to the maximum speed of the Dragon Isles Drakes.

“In the Dragon Isles, all characters of all races are on similar footing because everyone can summon a Dragon Isles Drake,” WoW developer Sunders explains, “However, this isn’t the case in other areas of the game where flying mounts are the mainstay of travel.” Sunders compares the pace of Soar to the current 410% speed of epic flying mounts in the Eastern Kingdoms region, noting that the current speed bonus gives Dracthyr “a drastic efficiency advantage over characters of other races when doing non-Dragon Isles content.”

They go on to explain that Soar is a core asset to the Dracthyr identity, but was “never intended to be a massive efficiency or performance improvement over other races.” As such, they explain that the team came to the decision that this nerf is “necessary for the long-term health of the game.” They note, however, that the change “didn’t diminish the fun of the locomotion mechanics” during playtesting and that players can still take advantage of skillful Soar use to move faster than characters on epic mounts – just a little less dramatically so.

Elsewhere, Sunders details a range of big tweaks coming to the Dracthyr Evoker – the new unique class for the dragon race. Devastation is the focus of attention, with the DPS-focused spec set for a number changes in the next Alpha build. 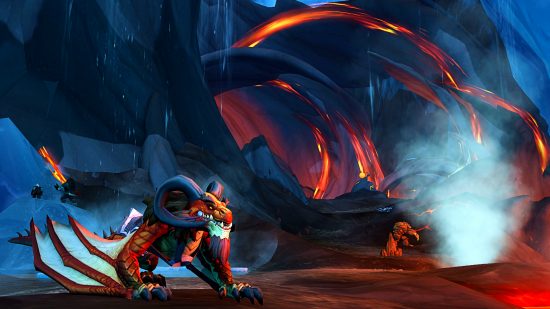 Among the points addressed by Blizzard are the talent tree emphasising a ‘red vs blue’ approach instead of encouraging a mix of both as intended. “Devastation utilises both red and blue magic, and the current tree isn’t celebrating that theme well enough,” explains Sunders, “Builds that use both types of magic should be the norm, with all-red or all-blue being much more niche.”

Also addressed are effects that scale with empower level, with a concern that it is being treated as the norm that “it is always correct to fully empower your spells” by charging them up to the maximum level, thus limiting gameplay options. In addition, Sunders lists that the combination of Feed the Flames and Everburning Flame is awkward, that Scarlet Adaptation feels too impactful on builds across the board, and that blue-centric single target builds don’t flow in a satisfying manner.

These are all the changes made in the upcoming Alpha build.

Playing WoW Shadowlands season 4 will reward you with a charming jellified cat mounted. We’ve also been hands-on with WoW Wrath of the Lich King Classic, and it feels like the perfect nostalgia trip to our World of Warcraft heydays.

Xbox Boss’ most anticipated game is a PlayStation Exclusive

Xbox And PlayStation Game Spending Is Falling, What’s Going On?

Xbox And PlayStation Game Spending Is Falling, What’s Going On?

Pac-12 notebook - Tiebreakers for the title game are coming

The 30 Best Crime Games Ever Made